There's currently a minor problem with the car park occupancy graph for Trumpington.

Until recently, the only feed we had of car park occupancy was a text based one intended for human consumption that said things like:

We parse this and use it to draw the graphs and to plot and report total capacity. Unfortunately, when the car park is full this changes to just this:

which doesn't indicate capacity. When this happens we currently fall-back to a hard-coded default which is normally fine because the capacity of most of Cambridge's car parks doesn't change. However building work at Trumpington means that the capacity has been going up and down like a yoyo over the last few months (1340 --> 1420 --> 1200), and that currently the car park is routinely full during the day Monday to Friday. Our hard-coded default is 1340 and this doesn't match the current reality of 1200 and this is causing weird looking graphs like this one from last week: 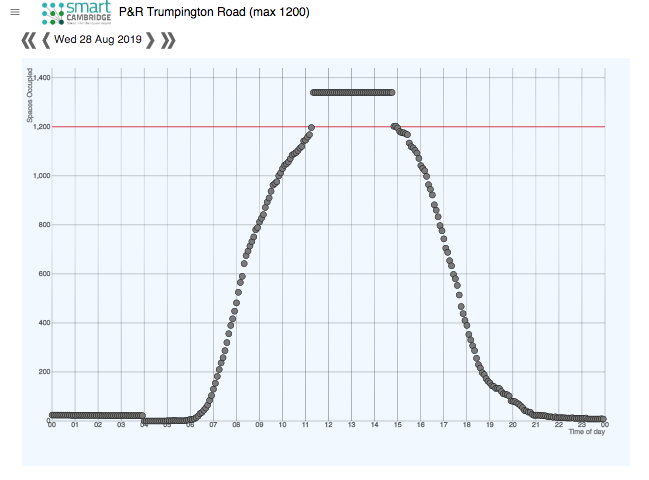 Fortunately we've recently gained access to a new feed that reports occupancy in a more machine-readable format. We are working on moving over to this feed. Once that's done the Trumpington car park graph should start looking sensible again.